Origin of the Aztecs

Lesson Title: Origin of the Aztecs

(A) Students have been immersed in a unit on Latin America and have explored the indigenous people, geography, culture and language. They have strong knowledge of the Mayan culture, however is lacking in knowledge of the Aztec culture. This knowledge was demonstrated by a K-W-L Chart of the Aztecs people. The majority of students are writing and reading fluently. Five students struggle with comprehension.

(B)Students were able to accurately identify and label Latin America, Mayan and Aztec lands. They completed a KWL chart on Aztec culture and used several resources to develop knowledge of the Aztecs.

Students will use a variety of intellectual skills to demonstrate their understanding of major ideas, eras, themes, developments and turning points in world history and examine the broad sweep of history from a variety of perspectives.

Standard 4:   Understanding the Cultural Contributions of the Arts
(NY State Standard for Arts, retrieved from http://www.p12.nysed.gov/nysatl/artstand.html (2.1.12)

Students will develop an understanding of the personal and cultural forces that shape artistic communication and how the arts in turn shape the diverse cultures of past and present society.

Objectives: Students will understand the historical and mythological accounts of the origins of the ancient Aztecs. They will then locate, identify, and label specific places on a map or globe.

Direct instruction 15 min– Students will be introduced to the Mexican flag and brainstorm their ideas about its origin. Students will hypothesize about the meaning of the cactus, eagle and serpent on the flag and make connections to how the Aztec civilization may have come to be.

Teacher reads aloud “In search of a Homeland.”

Work Time 20 min- Students will return to their desks to work independently using resources and the story to understand the meaning behind symbols and origins involving the Aztecs.

Closure 10 min-Students will share out their finding and curiosities.

Assessment-Teacher will assess understanding during conference time and during the share. Ask follow up questions if students are not confident with their explanations. Students will be assessed for their activity participation, their participation as audience members and their working material. Student project work will be reviewed against the rubric below.

Diversity: This lesson continues the work of opening a window into a new culture that we have begun with the unit and will continue with the study of different cultures all year. Allowing students to study the origin of the Aztec culture brings to life the understanding of their own culture’s origin in respect to other cultures throughout history.

“A hands-on activity supports students who struggle with verbal skills” (Cornett, 2011). Using visual and tactile skills, students that struggle with writing are able to use the images to show that they understand the content. This lesson also supports concreteness of the topic with the use of pictures, labels and names

Legend, In Search of a Homeland Handout

When would their searching be over? The people were nomads and had wandered for many long years, not even knowing where they were going. These people were considered the least civilized of all, brutal and viscous. And that they were, they took all they could from other people. Recently, the highest priest had stolen the young princess of another tribe and had sacrificed her heart to the god. When the tribe king found out, he tried to kill the people and chased them deep into the rainforest.

Now they wondered through the rainforest. The god had promised them a homeland-somewhere in return for their human sacrifice. The god promised the world to them. They wondered, what would it be like? When would they get there? There were no answers.

Who was this god on whom the people obeyed? His name was Huizilopochtli. This meant “blue hummingbird of the south.” But this god was nothing like a sweet small hummingbird who flew from flower to flower.

Huizilopochtli-god of the sun-was a fierce and terrifying god who was the lord of hunting and war. This god would give them a sign.

So the priests had told the people and led the way during the day and at night they would wait for visions in their dreams. Yes, the god had told these priests that there would be a certain sign, and when it appeared, there the people would make their home.

So the people continued traveling, day and night, passing the Anahuac(land between two waters) Valley, around Lake Texcoco leading to the middle of a valley. One day, the priests took the people over a trail to the shore of a giant lake call Aztlan. The sun was shining brightly, shimmering off the lake. In the distance lay two rocky islands with pieces of rock jutting up into the sky, surrounded by mud. The people, who had hoped to find a safe place built rafts and sailed out on the lake to reach those islands.

As they splashed ashore, they notice done particular rock with a prickly pear cactus growing out of a crevice. Sitting on the cactus was a majestic golden eagle. Its talons held tightly to the plant and its wings flapped up and down as it balanced there. A huge rattlesnake hung limply in the bird’s curved beak.

It was a sign from their god. Here, on these desolate islands in the middle of the lake, the people would build their city and named their city’s capital Tenochtitlan, the place of the prickly pear. 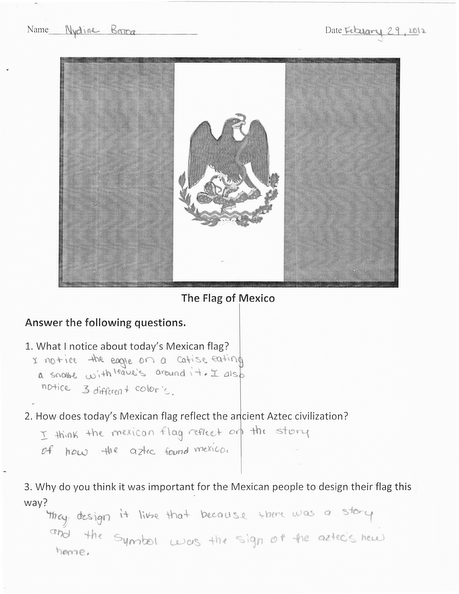